March 1930 The Hawaiian Contracting Company is awarded the contract to begin building the first unit of the new school plant on Kapalama Heights with a bid of $881,995. Work begins in April.

DR. HOMER F. BARNES is named principal of the boy’s school. Dr. Barnes is eager to improve Kamehameha, but has little knowledge of Hawaiian character, which causes some misunderstanding at first, but when it is generally acknowledged that he wishes only the best for the students, things go smoothly. In 1934, Dr. Barnes becomes principal of Kamehameha as the Trustees abolish the position of president and Mr. Midkiff resigns in the spring.

Spring 1931 KA BUKE O KAMEHAMEHA is first issued, and is designed to show the school life and activities, courses of study, history and other general information to take place of the annual school catalog.

Ka Moi
Developed into more of a student project, the news stories are written by students, the copy reading, proofreading, and dummy make-up arrangement are all done with a minimum of teacher supervision.  This differs from Handicraft which was written by instructors or the principal but typeset and printed by students.

September 13 1931
DEDICATION OF THE NEW GIRL’S SCHOOL BUILDINGS was held. There are 3 dormitories, the Senior cottage, the Gymnasium, the dining hall, the administration building and the library. 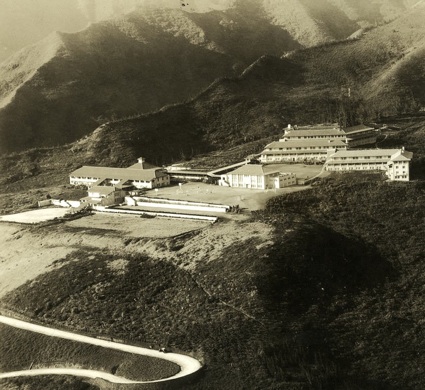 When the girls moved up to Kapalama heights, the preparatory department moved into the main hall for a year, and then it was used by the school for guest and faculty housing. In the mid-1930s, the Main hall was torn down and the government purchased the land to develop low-rent housing. The Hawai’i Housing Authority gained permission to build the Kamehameha Homes on the site.

HUI OIWI is organized by the students of the school for boys. The club revives and perpetuates the ideals, customs and ways of the ancient Hawaiians.

JOSEPH KEKUKU DIES. The father of the steel guitar, and Kamehameha class of 1894, passes in the spring of 1932. Playing his hair comb like a harmonica, with his guitar in his lap, Kekuku dropped the comb on the strings causing them to vibrate. He then decided to use the comb to stop the guitar strings, which he did, and was delighted with the new effect. He was then inspired to substitute the back of his knife for his comb, and the music produced was even more delightful. Eventually abandoning the knife for a piece of steel from his shop teacher, Kekuku says it took him 7 years to master the steel guitar. In 1904 he went to the United States and played in theaters from coast to coast. In 1919, he went to Europe for 8 years and played for kings and queens.

Summer 1935 Over 50 Kamehameha School for Boys students and alumni colonize Howland, Baker and Jarvis (Line) islands for the U.S.A. as potential air landing sites and to track Japanese and British activities in the Pacific. Various groups of Boys occupy the islands until February 1941. Hui Panala’au funds a scholarship to the University of Hawai’i. Under a Jarvis Moon, a documentary in honor of the Line Island boys was made in 2009 by Juniroa Productions.

THE 50TH ANNIVERSARY CELEBRATION of the founding of Kamehameha Schools is held in the new auditorium which remains unnamed until 1985, at which time it was named for Ruth Ke’elikolani.

1938 While the Trustees were in a financial position to construct a new boy’s school in 1935, the move took on new urgency in 1938, when the territorial government condemned for purchase 30 acres of Kamehameha’s Kalihi Campus (Ka’iwiula) bordering King Street, which would become the new Farrington High School. Kamehameha would lose its chapel, main hall, shop buildings and one dormitory. The Goodhue plans used for the girl’s school were abandoned and so the architecture of the School for Boys was quite a noticeable departure from that of the Girl’s School. More functional than artistic, the boy’s school buildings featured poured concrete covered with plaster, and broad lanai with covered passageways. The buildings are perched on the hillsides rather than blended or nestled into their locations.

Frank E. Midkiff is appointed Trustee of the Bishop Estate. He serves from 1939 to 1983.